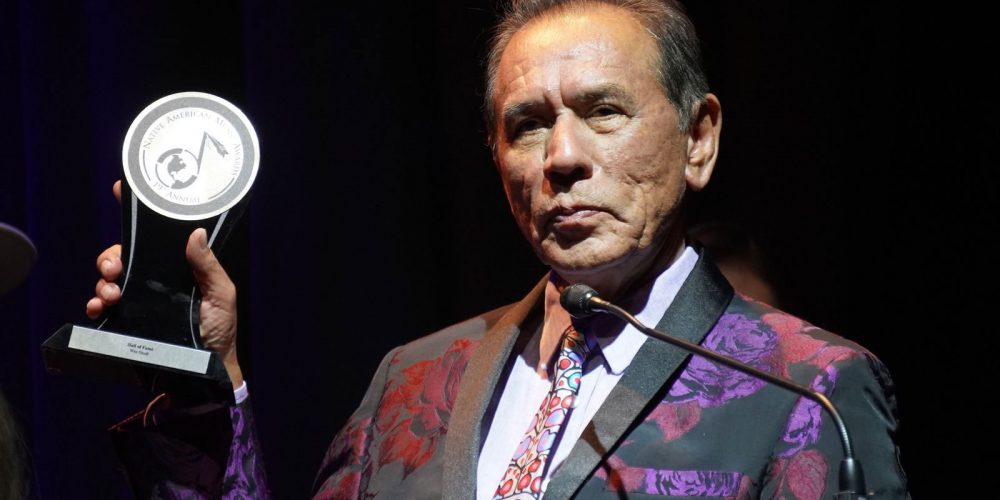 It was a gala event that celebrated and honored Native America’s newest and brightest entertainers in the field of music. Ambitious and impressive music recordings were honored and recognized for their excellence in traditional and contemporary music genres in a total of 38 awards presented throughout the evening with winners determined by a national voting campaign.

Innastate, Kelly Derrickson, The Cody Blackbird Band, Shelley Morningsong and a closing performance of “Fry Bread” by Native Americana’s Keith Secola featuring Wes and Mickie & others. “Everybody go back to your localities.

Go back and spread the seeds of inspiration. Go back & teach young people your music and inspire people. That’s what art is about. Inspiration.” Keith Secola The world’s largest and only professional membership-based organization dedicated to showcasing and honoring the best new music initiatives and recordings from the Americas. www.NAMALIVE.com

Wes Studi is a Native Oklahoman, Vietnam Veteran, Actor, Musician, Sculptor, Author and the first indigenous Native American actor to receive an Academy Award. His first few roles quickly established him as one of the most compelling actors in Hollywood; form the Pawnee Warrior in Dances with Wolves, to his powerful performance as Magua in Last of the Mohicans’; and as a LAPD Detective in Heat with Robert De Niro and Al Pacino. Wes has well over 80 film and television productions to his credit, including his more recent appearances in Avatar and Hostiles. He has brought unmatched dignity and integrity with each and every one of his performances. He is undoubtedly, the greatest and most authentic Native American actor of our time. Earlier, the Academy of Motion Picture Arts & Sciences bestowed him with a Governors Award for his distinguished 30 year career, making him the first Native American actor to receive an Oscar. Wes is also an accomplished musician and fronts the band Firecat of Discord with his wife, singer Maura Dhu while playing bass and guitar. His band has released one CD and recently completed new material. His work has established him as a superior role model for all of Indian Country and for other indigenous actors and entertainers around the world. The Native American Music Awards is very proud to induct Wes Studi into the NAMA Hall of Fame.